In About Lucian Jens van Daele and his collective Burning Bridges go to work ruthlessly, on the turbulent and complex thoughts and ideas from the British painter Lucian Freud (1922-2011). The focal point of this energetic dance performance that is intertwined with the live music is the rawness, the complete honestly, and the exposure that is both used literally and metaphorically.

‘Choreographer Jens van Daele knows how to deal with the world of the painter in his choreography on Lucian Freud. The dancers strikingly translate the urgency of Freuds raw realistic portraits.’
Mirjam van der Linden, Volkskrant 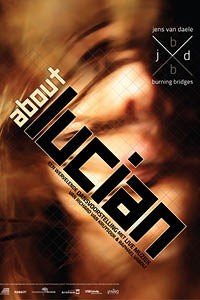 With Swiss / French Ensemble Battida he created Spring Tide in 2013. This performance was inspired by Igor Stravinsky ‘Le Sacre du Printemps’. In 2015, British painter Lucian Freud serves as an inspiration for About Lucian. However, Jens also finds inspiration closer to home. His own parents’ life story is central to Over Onze Vader.In this performance, he combines his distinctive raw dance and live music with spoken word theatre for the first time.

Burning Bridges consist of an international group of enthusiastic dancers and musicians. During About Lucian they go and seek their ‘true-self’, and bring the penetrating works of Lucian Freud into life. About Lucian is above all about endurance, (just like the relentlessness of Freud insisting in the models posing nude again and again), but also courage and self-acceptance. It is a performance about the naked truth, and taking responsibility for your own actions and fate.  An ode to a brilliantly good and inspiring artist: Lucian Freud.

This performance was in theatres from March 2015 until May 2016. About Lucian has been made possible with financial support from the Fonds Podiumkunsten,  Fonds 21, Prins Bernhard Cultuurfonds, Gemeente Arnhem, VSB Fonds and Janivo Stichting.