For Over Onze Vader (About Our Father), Jens van Daele found inspiration in his father’s letters, full of longing. Jens, who comes from a family with six children, describes his parents’ marriage through these letters. The marriage between Godelieve and Benny lasted until his father’s death. A deep connection, marked by great lows and loving highs. A moving lifelong togetherness, in which madness and happiness wandered hand in hand.

A son and a mother look back. Over Onze Vader deals with uncomfortable truths and memories that threaten to fade away. Melancholy, intense sorrow, happiness and unconditional love intertwine. A tribute through music, theatre and dance. A tribute to a beautiful man, with all his prickly aspects and misguided paths. The performance is a charming story in fiery Flemish, featuring powerful dance and intense live music. 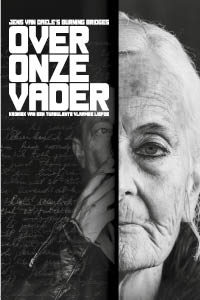 Quote from a love letter

“How blissful and beautiful our marriage will be.
To be with you and all day and night. To be yours.
To hear, see and love each other at all times.
To support and help each other and, above all, to never think of ourselves.
I am to think of you, and you of me, and we shall never quarrel.
I am to think like you, and you like me, eh, my sweetheart.
We are to live in perfect harmony. “

(written by Jens’ father, Benny Van Daele, to his wife to be, Godelieve Flies, in the early 1960s)

Choreographer Jens Van Daele directed Over Onze Vader. Prior to his career as a choreographer, he was a dancer with Introdans, O Vertigo (Canada), Conny Janssen Danst, Rogie & Company and Club Guy & Roni. In 2004, he received a Zwaan award for his role in ‘Spring’ by Rogie & Company. (De Zwaan is the most prestigious dance award in the Netherlands.)

In Over Onze Vader, Jens van Dalen moves across the stage with dancer Patricia van Deutekom, with whom he has worked for years. New talent Pjotr Nuyts’s also has a role. Flemish actress Eva Schram relates the highly personal text. She developed these lines together with Jens, based on his father’s letters, mother’s diary and interviews which actress Anna van der Kruis conducted with Jens’ mother. Compositions featuring guitar and electronics are performed live by Richard van Kruysdijk. Tom Verheijen is responsibe for care of the gripping lighting design.

The very first performance took place in a sandpit, during the 2015 edition of Oerol Festival. Over Onze Vader was first performed in the theatre in the Schouwburg Arnhem on February 20, 2016. After this, the performance was staged at 26 theatres throughout The Netherlands.

Over Onze Vader is a co-production with Generale Oost. The piece has been made possible thanks to financial support from Productiefonds Overijssel, Lira Fonds, VSFonds, Fonds21, Fonds Podiumkunsten and the municipality of Arnhem.

At selected theaters, Over Onze Vader was lovingly encapsulated by a live radio program. In ‘Love Radio’, third-year Creative Writing student Martin Rombouts examined just what love might be all about. Love has led to killing and destroyed entire kingdoms. It is responsible for today’s vast global population growth, global warming and the disappearance of nature. Love, he has been told, can bring strength as well as softness. It can destroy and heal. Excite and hurt.