A dance inspired by the invisible forces that unite us with the maelstrom of the universe. (Ginette Laurin) 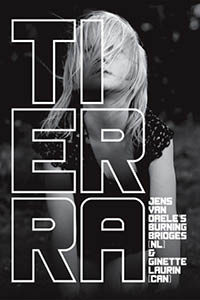 With her company, O Vertigo Danse, Laurin has developed an extensive body of work that marries her wonderfully dynamic physicality with rich visual environments. Now considered one of the most important figures in the Canadian contemporary dance landscape, Laurin’s work has travelled the world and been honoured for it’s utterly expressive force.

A dance about the ground beneath our feet, the nothingness in time, the dust from which we’re born and the mud into which we’ll return. (Jens van Daele)

Van Daele danced with Montreal’s O Vertigo Danse in the nineties, a collaboration that left an indelible impression that helped form his vision not only of contemporary dance but of life itself. Now, 20 years later, Laurin and Van Daele are bundling their forces, bringing out Tierra: A vibrant, theatrical dance concert, in which they project a radiant yet fragile image of the human being. In Tierra, Laurin’s pure and poetic dance language melts with the powerful and theatrical idiom of Van Daele.

Since 2012, Van Daele has developed Burning Bridges as a collective gathering place for carefully selected international performers. In Tierra, five intriguing women will dance and perform, accompanied by composer/musicians Alexandra Bellon & Richard van Kruysdijk, who will play a wide range of percussion instruments and electronics.

Tierra is an ‘earthly’ dance feast in which the combined forces of contemporary dance and live music will go straight to the audience’s heart.

Tierra is a production by Foundation Jens van Daele i.c.w. CCOV Montreal and Danse Cité and is made possible with contributions by Performing Arts Fund NL, Municipality of Arnhem and the Prins Bernhard Cultuurfonds.